“Good storytelling is a sort of fearless magic act, in which events move too quickly to tolerate objection… And this is the way that director Randy Baker tells this story: with such assurance and commitment that the impossible seems true.”   – DC Theater Scene

Randy Baker is an award-winning playwright, director and co-Artistic Director of Rorschach Theatre in Washington DC, which he founded  with Jenny McConnell Frederick in the summer of 1999.  He is also adjunct faculty at George Washington University and a frequent guest artist and educator at a number of institutions including Theatre Lab, National Conservatory of Dramatic Arts, and Imagination Stage.  He recently finished his residency as a member of The Playwright’s Arena, a part of Arena Stage’s American Voices New Play Institute and is the Washington DC regional rep for the Dramatists Guild of America.

Upcoming projects include directing a revival of Rorschach Theatre’s She Kills Monsters with site specific elements and an adapted story line; directing and writing a new play, Wolves in the Lion City (A commissioned piece for the teens at Theatre Lab about American teens growing up in Singapore); and directing and adapting The Legend of Hang Tuah (A Malay epic with martial arts and shadow puppetry) to premiere next summer. Rorschach Theatre‘s 20th anniversary season is soon to be announced.

As a director with Rorschach Theatre he has directed Very Still and Hard to See (nominated for five Helen Hayes awards including Best Director), The Electric Baby, She Kills Monsters, The Minotaur, After the Quake, 1001, Rhinoceros, JB, Behold!, Fair Ladies at a Game of Poem Cards  and Monster. Some recent projects outside of Rorschach include  the seven-room living installation piece, Hello, My Name Is… at The Welders (nominated for three Helen Hayes awards including Best Director), a shadow puppet gamelan-inspired A Midsummer Night’s Dream at WSC Avant Bard, Big Love at Catholic University, Anon/ymous at Georgetown University and Marat/Sade and his own adaptation of Rashōmon at American University. Some of the other companies where he has directed include The Source Festival, WSC Avant Bard, The Welders, Inkwell Theatre, First Draft, NCDA’s Actors Repertory Theatre, Wayward Theatre,  Cherry Red Productions, Catholic University, American University, Georgetown University and Young Playwrights Theater as well as a number of shows with teen actors at Imagination Stage and Theatre Lab. 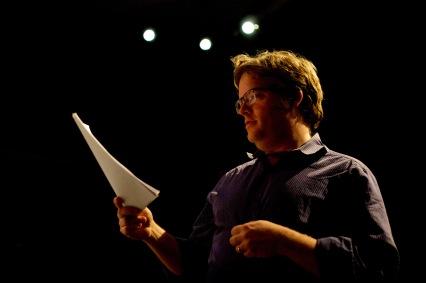 Plays he has written and had produced at Rorschach Theatre include the recent world premiere of Forgotten Kingdoms (2017), a play about a missionary in Indonesia whose life is changed forever in one supernatural night while he tries to convert a man who will not be converted; Truth & Beauty Bombs: A Softer World a project co-written with four other playwrights and inspired by the web comic A Softer World; as well as the full-length plays Dream Sailors and After the Flood and the short plays Paolo and Francesca, The Corleone, Beit Jala and Crunch. Other produced plays include the full length plays Circus of Fallen Angels at the National Conservatory of Dramatic Arts, wild42hold at George Washington University, an adaptation of Rashōmon at American University and the short plays The Rabbit and The Snake and Cassandra Dances with the Devil at Source Theatre, A Lonely Dictator on the Eve of Revolution at Forum Theatre, The Boy Who Knew No Fear at Three Leaches Theatre (Colorado), Sam the Prophet, Veronica’s Omelet and The Wind at Their Backs at Extreme Exchange, The Ballad of Saint Valentine at the Washington Theatre Festival and Two Strangers Divided by Glass (2015), Blood on the Hook (2015), Red, Yellow and Blue (2014) and The Creek Below (2014) at the One Minute Play Festival. He also collaborated with multiple artists at Rorschach Theatre to create the two found space projects Thesmophoria (2016) and Six Impossible Things (2014).

Readings and workshops of plays include The Burning Road which was developed at Arena stage and had a reading in the Kogod Cradle in March 2014; Forgotten Kingdoms which has received readings at National New Play Network, Kennedy Center Page to Stage festival, Inkwell Theatre, The Arts Club of Washington, Jakarta Players (Indonesia), Wordsmyth Theater (Houston) and the National Newborn Festival at MTWorks (New York) where it won the Audience Choice Award; Monastery which was developed through Theater J’s Locally Grown program and had a public reading in May 2013; Circus of Fallen Angels which was commissioned by and performed at the National Conservatory for Dramatic Arts and received a workshop production at American University;  Gilgamesh which received a staged reading at Rorschach Theatre and Vox which was developed at Theater Alliance.

The son of educators and the grandson of Pentecostal missionaries, Randy grew up overseas, mostly in Singapore and Malaysia where his family still lives. He attended the University of Richmond before moving to Washington DC in 1997 and currently lives in Takoma Park with his wife, costume designer Debra Kim Sivigny.  He received his MFA in creative writing from Goddard College and is and is the Washington DC regional rep for the Dramatists Guild of America.

“It’s strong, stirring stuff—a modern fable with an oblique moral. It enchants us like a dream and kicks like a nightmare.” – Washington City Paper (About After the Quake, 2011: Directing) 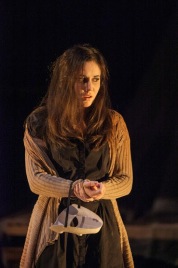 “The play opens with one of the most masterfully atmospheric sequences I’ve witnessed in a DC theater. Beneath droning 1940’s swing and eerie lighting, the audience finds itself surrounded by masked ghouls shambling across the stage with mannequin-like stiffness. Baker and his design team blend the terror of white-masked intruders from films like Funny Games with the jerky, unnerving movement of Japanese movie ghosts; the whole setup is a horror fan’s dream. very still & hard to see is an immersive carousel of horrors that will have you checking the locks and looking under the bed. Just remember: there’s no shame in sleeping with the lights on. — DC Theatre Scene (About Very Still and Hard to See, 2015: Directing)

Truth & Beauty Bombs lights the world on fire and dances in the flames. It destroys preconceived notions and offers a new, poetic language for philosophical discussions of life and death.” – DC Theatre Scene (About Truth & Beauty Bombs: A Softer World, 2015: Playwriting)

“Extraordinarily ambitious… Staged inside Atlas Performing Arts Center’s Theatre Lab, the action takes place both inside and outside a circle of seats where the audience sits. The walls are covered in a maze of brown string and bare light bulbs occasionally flicker overhead… The universally strong performances and the heady concepts of desire, self-control, and fate make this an absorbing and inventive work.” – The Washingtonian (About The Minotaur, 2013: Directing)

“Those details pay off when Puck morphs from a shadow into a three-dimensional sprite who bears a distinct resemblance to the two-dimensional version. The likeness between silhouette and humanoid is one of many rewarding touches in director Randy Baker’s beautiful production.” –Washington Post (About A Midsummer Night’s Dream, 2016: Directing)

“Forgotten Kingdoms touches on such themes as culture clash, the legacy of colonialism and competition among religions, but it is far from an issue play. Bold and often poignant, the work extends an appealingly personal and idiosyncratic vision, rich in telling detail. The title may reference forgetting, but the play often seems as clear and specific as a total-recall memory.” – Washington Post (About Forgotten Kingdoms, 2017: Playwriting)