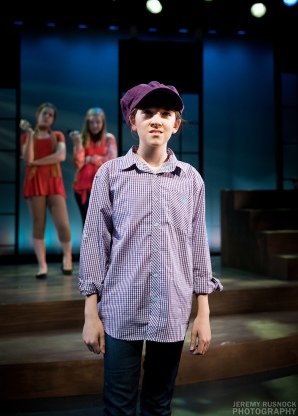 All photos on this page: Jeremy Rusnock Photography

(Excerpt from the director’s notes printed in the program)

When I say love, I don’t just mean the romantic love of Romeo and Juliet or Orsino and Viola – I also mean the love of a song, of a movie, of a new skill, of a cause. And it’s beautiful. The feelings are new and the passions intense and it reminds us that there is always more to discover. It’s also why the teenage years are terrible: when it’s so easy to fall in love, it is equally easy to have that love ripped away.

Shakespeare’s beautiful and terrible Twelfth Night, like many of his comedies, has always felt to me like a teenage view of the world. The language may be sophisticated but the abandon with which they commit to their shifting passions feels decidedly adolescent. In re-imagining the play, we have placed the show in a world with no adults – just a group of teenagers improbably left to their own devices by absent parents. There are parties, bad decisions and gloriously poetic relationships. There are also moments of terrible cruelty and a landscape of unforgiving adolescence.

This world of teenagers is decidedly contemporary, and not just because they dance to Beyoncé and Feste plays songs by Rihanna. Sir Toby Belch, Olivia’s hilarious and inappropriate uncle has been reimagined as “Toby” – a girl who is the life of any party. Malvolio, Olivia’s famously prudish man servant, has been reimagined as young woman, insecure and discovering her sexuality in her love for Olivia. Viola, who is written as a young woman who dresses as a man to enter into Orsino’s court, is now simply boyish and is comfortable being mistaken for her non-biological gender. 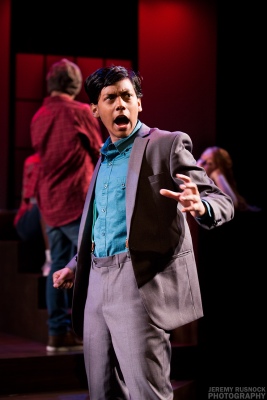 Setting this version of Twelfth Night in a world in which these actors could invest was important to me. I’ve always felt that classics such as Twelfth Night should not be relegated to dusty bookshelves and should be as vital and relevant as the day they were written. Stories that we tell again and again – from Shakespeare to Jane Austen to John Hughes – tell us about who we once were and who we are now. They belong to all of us and it is essential that we take ownership of them.

As adults watching teens fall in love, the remarkable moment comes when you realize you are being allowed to see the world with new eyes. Maybe you’re just seeing Shakespeare in a new way or maybe the entire world isn’t quite what you imagined.

“Imagination Stage’s production of Twelfth Night is an inventive update of Shakespeare’s classic play. Adapted and directed by Randy Baker, the show features the teenage actors from the Acting Conservatory’s graduating class of 2018 playing all the roles, with a change in gender to several characters. Director Randy Baker has done an excellent job. The actors navigate the stage and each other easily, using every inch of the theater. This is a Twelfth Night for 21st-century young people. “ 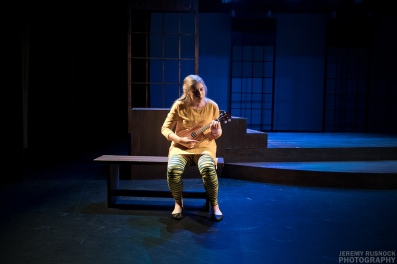